In this review we will compare in detail two quite similar lenses for Sony mirrorless APS-C, so E-mount: the Sony 50 mm f1.8 OSS and then Sigma 60 mm f2.8 Art. Full specifications available in our LightPoint Lens Database at these links: Sony E 50 f1.8 and Sigma 60 f2.8.

They are two primes for cameras like A5100, A6000, A6300, NEX series, that, having a sensor with a crop factor of 1.5 with respect to full frame one, makes the equivalent focal lenght longer, respectively 75 mm for the Sony lens and 90 mm for the Sigma one. They are two medium telephoto lenses for portrait, since they have a large maximum aperture (f1.8 and f2.8) that allows for nice blurred backgrounds.

The Sigma lens is also available for micro four-thirds cameras, e.g. the compact mirrorless Olympus, Panasonic and so on with interchangeable optics.

Let's dive into the various aspects on a Sony camera (specifically an A6300).

For both of them, a small box is provided, containing rear and front lens caps and a hood. Sigma also provides a soft case for carrying the lens around with a good interspace on the bottom to protect it from damages, good Sigma!

They both come in silver and black versions. 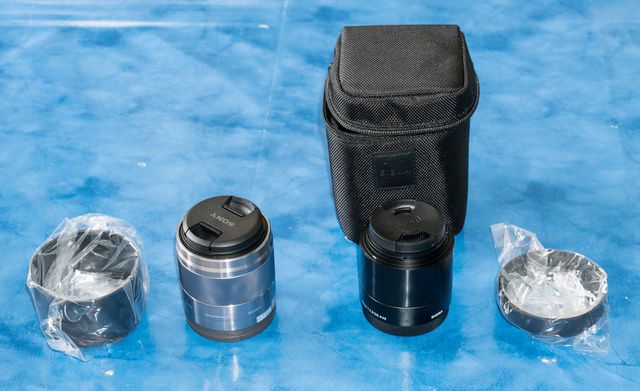 They both have only the focus ring as a command on the lens, no aperture ring but it's not a problem (it is controlled by the camera), no depth of field indicator -nowadays you can use a smartphone app for that if needed-.

The front lens rotates while focusing in the Sigma, not in the Sony, but the provided Sigma hood can rotate.

The material is good plastic with metal mount for attaching to the camera.

There are seven aperture blades in both lenses, rounded for a better blurred background (bokeh), especially when there are front lights.

We have compared the optical quality in terms of resolution, micro contrast and chromatic aberration for the two lenses.

Here you have the findings:

Now let's see some example of visual quality - all picture shot in RAW and converted into JPG with Lightroom 6.5 using embedded lens profile: 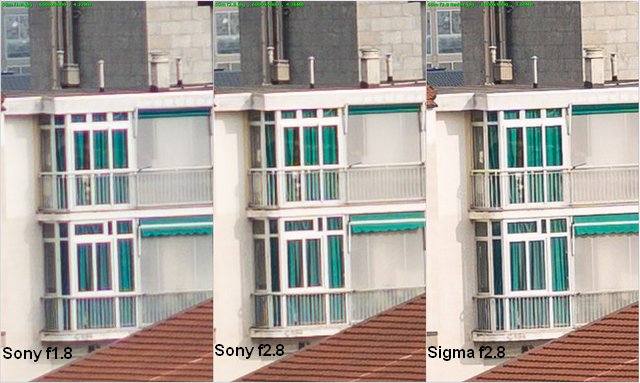 With this detail at 100% in image center, you see that the Sigma is sharper than Sony when both at f2.8 (look for example at the roof) and that the Sony at f1.8, besides softer, shows also evident chromatic aberration, that at f2.8 becomes acceptable.

An interesting off-topic comparison: the Sony 50 mm at f1.8 is anyway sharper than the Sony 18-200 f3.5-6.3 at 50 mm, being this a popular one-lens travel zoom, that at 50 mm of focal lenght can open the aperture just to.. f5! So if you have that zoom, both the Sony 50 mm and the Sigma 60 mm are a significant quality upgrade for medium focal lenght.

If you look at the borders of image in the Sony lens (we are back to Sony 50 mm), the problem of chromatic aberration shows up quite frequently at f1.8 and only at f2.8 becomes acceptable, at f4 it is gone. 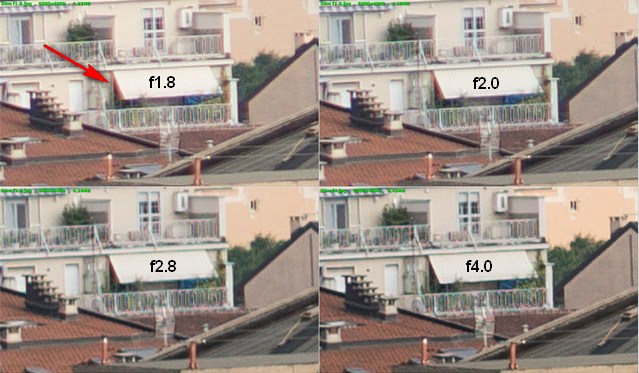 We conclude this dive into resolution and chromatic aberration comparing the Sony and the Sigma on the border with f2.8 and the sweet spot at f5.6 (at smaller apertures, the resolution starts to slowly decrease as in all lenses mainly for diffraction): 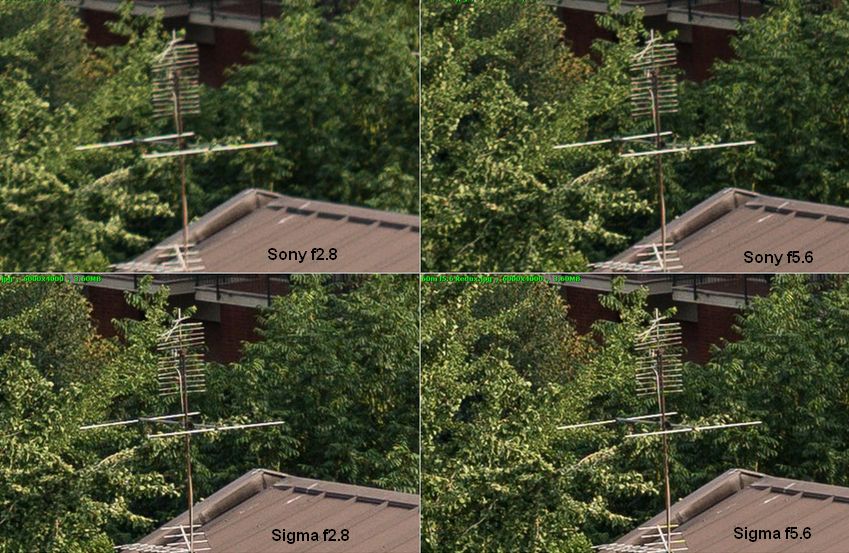 We see again that Sigma is much sharper, already at f2.8 is incredibly "clean" being this almost the corner of the image. At f5.6 the resolution is great - just note that the false colors in the aerial is due to sensor moiré and not to the lens.

Besides superior sharpness and less chromatic aberration of Sigma, though the quality of Sony is not bad, the latter has two advantages: a wider aperture, that we have seen is essentially useful for a better bokeh, and the optical stabilization (as in its name OSS - Optical Steady Shot).

Reasoning around blurred background, we have to keep in mind that with a fixed distance of the subject, having the Sigma a longer focal length (60 mm vs 50 mm) it has already a narrower depth of field. In other words, you can get around the same blurring with Sony at f2.2 and with Sigma at f2.8 if the subject is at the same distance. But.. you can move closer to the subject to have it occupy the same space in the picture as with the Sigma and go down to f1.8 with Sony (loosing sharpness): in this case the more pleasing blurring with the Sony for narrower depth of field is evident, as in the next figure.

The quality and shape of the bokeh is good in both lenses but with some differences and we have tested it with a backlight to enhance the behavior. Here you can judge by yourself:

At f2.8 in Sigma the bokeh is more rounded but less uniform in the internal - the sony shows the 7 blades of the aperture but inside the circle is very smooth. At f1.8 the Sony bokeh is very pleasant.

Both lenses shows some chromatic aberration - the red halo on the right - and some flaring - the second circle below the mai one is an internal reflection in the lens.

The stabilization allows 2 to 4 (claimed by Sony, but hardly is more than 3) stops of longer shutter times. In the Sony, being a 50 mm that is equivalent to 75 mm, you shoot not go under 1/80 second hand held, but with OSS you can shoot comfortably at 1/20 or even 1/15-1/10 if having steady hands. But always with still subjects.

This is a clear advantage on the Sigma, since you can shoot with at least 3 stops of difference: at least 2 from stabilization and 1 from goingo from f2.8 to f2 (if you avoid the softer f1.8). But.. are these 3 stops useful?

Using a Sony A6300 that has one of the best non-full frame sensors and that the Sigma is quite sharper than the Sony so that is stands well a heavy noise reduction pass in post-production, 3 more stops are not so useful as it may sound: a Sigma Sigma at f2.8 - 1/80 sec - 3200 ISO with respect to a Sony shot at f2 - 1/20 sec - 400 ISO (3 stops less overall) is much noiser, yes, and with less color fidelity, but with a good post processing you can make it look not that worse, and even sometimes sharper at the end, though noiser of course.

The advantage is unsurpassed when the light condition is very very poor: when the Sony at full aperture f1.8 and with stabilization needs 1600 ISO or more, then shooting with the Sigma would require 12800 ISO or more and in those conditions, the noise with Sigma becomes no recoverable.

Good for both, around 1 second from close to infinity (not extremely fast), a bit quicker on Sigma - Sony hunts a bit also if already in focus.

With the Sony, being a native lens, all autofocus points are used for fast (phase detection) focusing, while only central point with Sigma.

Both lenses are very good stopped down to f4 or more. To summarize the differences to choose between them:

See these products on Amazon.com