The box contains a pouch and a plastic hood. 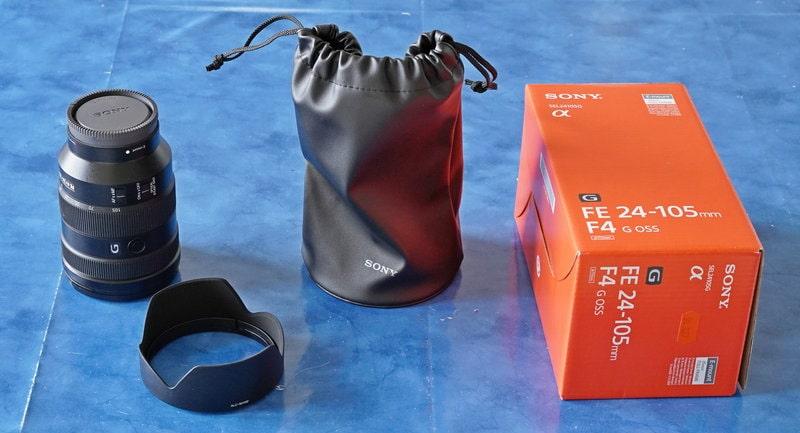 What is in the box

The optical quality is great, you get an impression of robustness, it is a lens of G series (not the top that is the G Master but anyway we are talking about real high quality). The rubber rings for zooming and focusing get easily a bit dirty with dust but it is not a real problem. 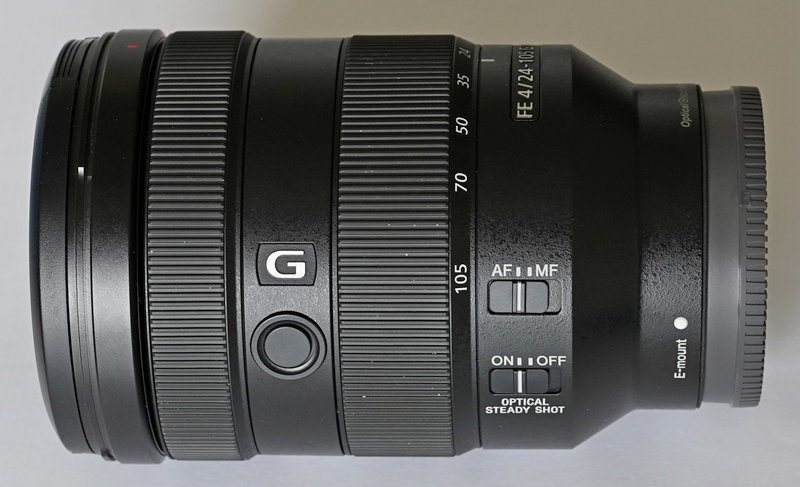 The aperture is made of 9 blades for a quasi-circular aperture, a lot of lenses (17) are employed into 14 groups with 4 aspherical elements and 3 ones with very low dispersion, to reduce typical optical imperfections (chromatic aberrations, loss of sharpness in the borders, etc.).

There are 3 commands on the lens: the AF/MF switch, the OSS switch and a button that can be customized on the camera for various purposes - it is typically associated to focus hold or to eye focus.

Officially the lens is "dust and moisture resistant", though maybe it's not wise to keep it unprotected under a storm... - for example there is no rubber ring around the rear attachment with the camera. 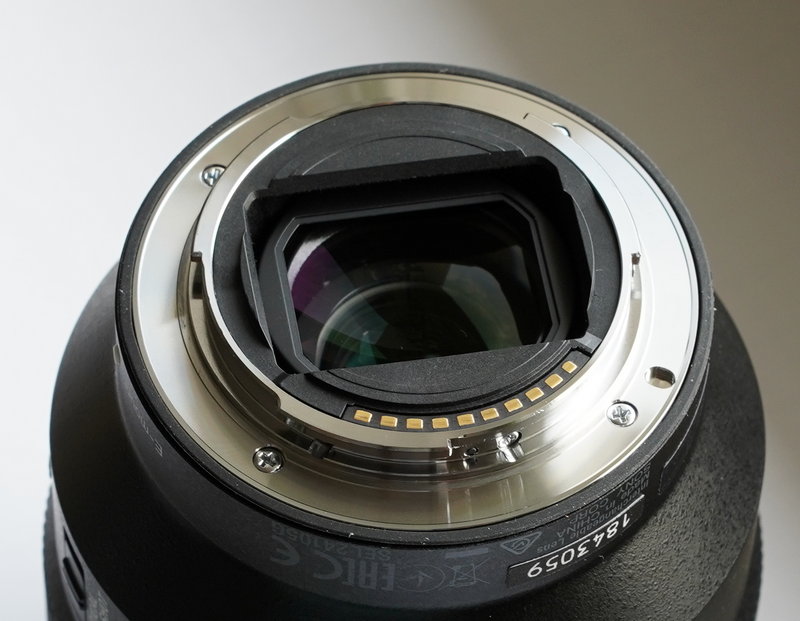 Zooming does make the lens longer. There is no lock switch to prevent from creeping when vertical but it does not seem to be needed, - after some months of usage no creeping detected.

Filters are supported with a diameter of 77 mm.

Focus is internal, so the lens does not extend nor front lens rotates, useful for example to mount a polarizer filter.

Very interesting is its almost macro characteristics: the minimum focus distance is just 38 cm (15 inches) so that you can get a magnification ratio of 0.31 that is more than similar lenses (e.g. the Sigma 24-105 provides 0.21, the new Canon 0.24 and the old one 0.23). In practical use, so close shots do not come out extremely sharp at f/4 and you need to stop down a little (or moving further a couple of inches) to have a higher sharpness.

Manual focus is indirect as for all Sony cameras - called focus by wire: turning the focus ring sends an electrical signal to the camera that in turn controls the focusing of the lens. Who is used to a direct control, this ways of manual focusing can be unpleasant and less precise, in practical use with image enlargement in the view finder (focus assist) it is quite easy to achieve a good focus precision, of course you cannot rely on focus marks on the lens, so for astrophotography the task can become complex.

And now let's dive into one of the most important aspect that is the quality of the image through this lens.

Without auto-correction enabled by default in the camera (or in post-processing), the distortion would be quite strong: barrel distorsion in the wide position and pincushion in the tele position. The automatic correction does a good job though if being nit-picky, some slight residual remains though not bothersome.

Also vignetting, that would be quite high at wide focal (corners would be almost black), is well auto-corrected via software.

Tests for resolution/sharpness have been done with full frame camera Sony A7 III that has 24 megapixels, with multiple shots and chosing the best one each time.

And now some samples to see in practice the differences at various focal length and apertures - all crops are at 100% and must be viewed at their full size to appreciate differences (very difficult from a smartphone screen).

Let's start at 24 mm: no visible differences in the center with stopping down, always great sharpness; borders improve stopping down with very good performances at any aperture for such a zoom. 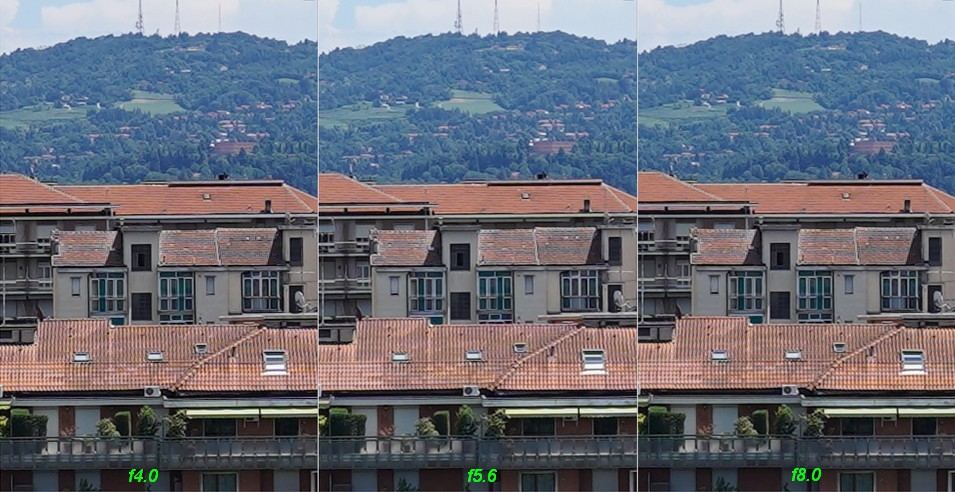 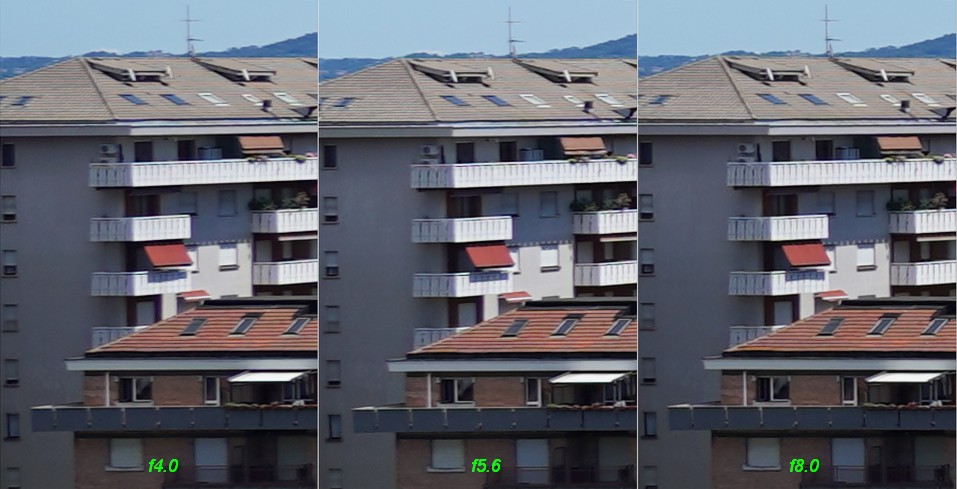 Now let's see sharpness at 35 mm: center always great, borders are softer but acceptable, improving in contrast and sharpness stopping down to f/5.6-8. 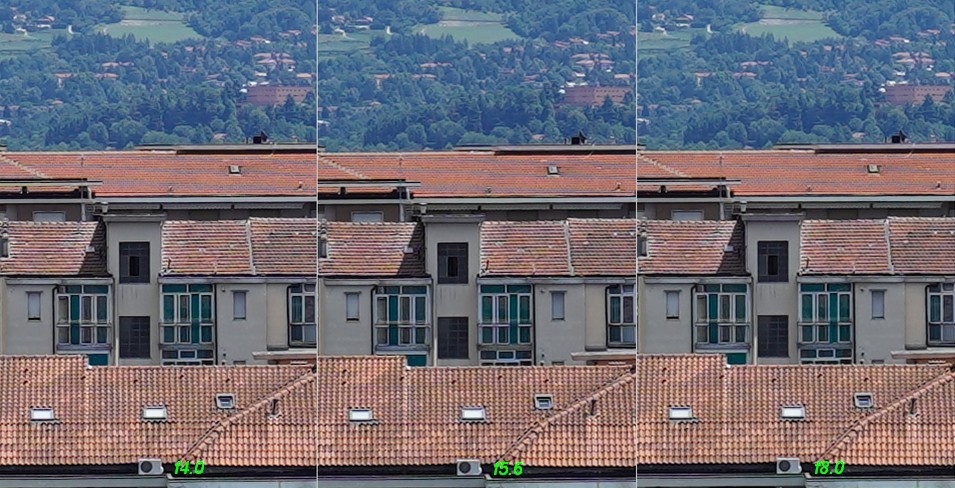 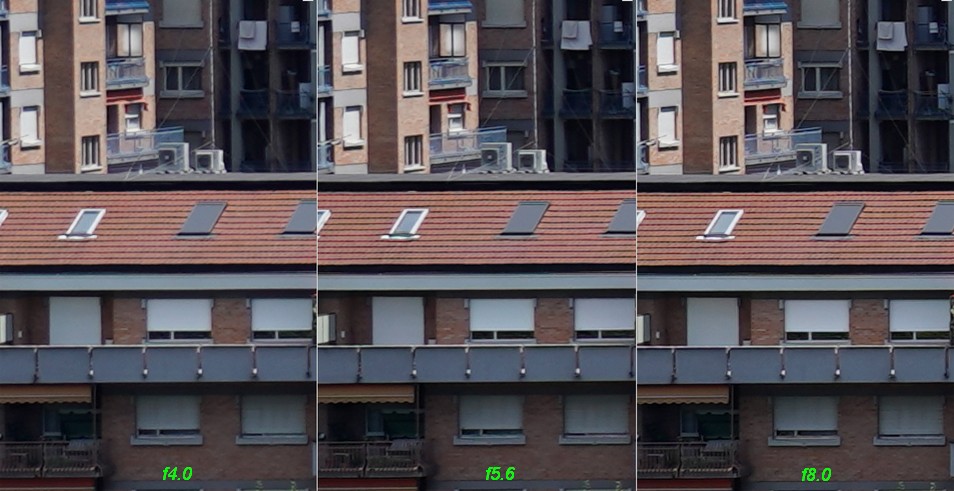 Let's go to 50 mm: center always very good (though slightly less than at wider focal), this time we'll check a corner and we see that going to f5.6-8 is needed to achieve good contrast and higher sharpness. 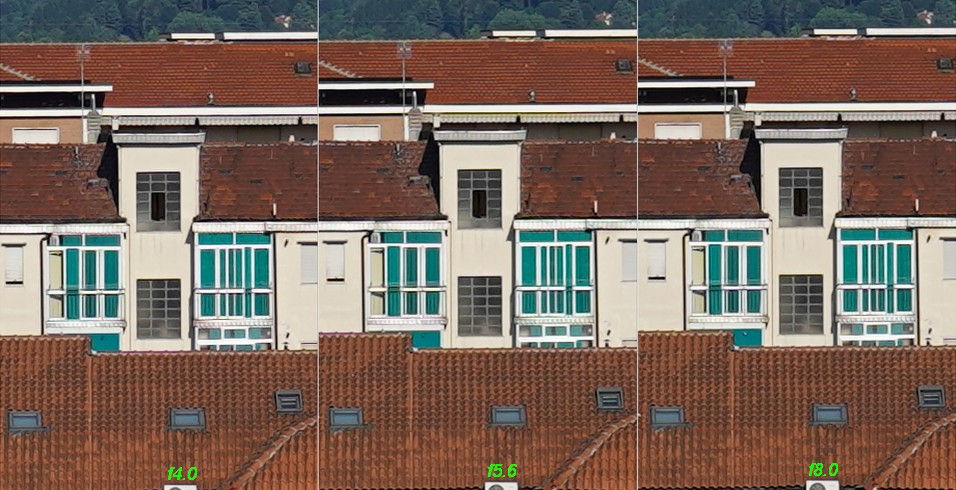 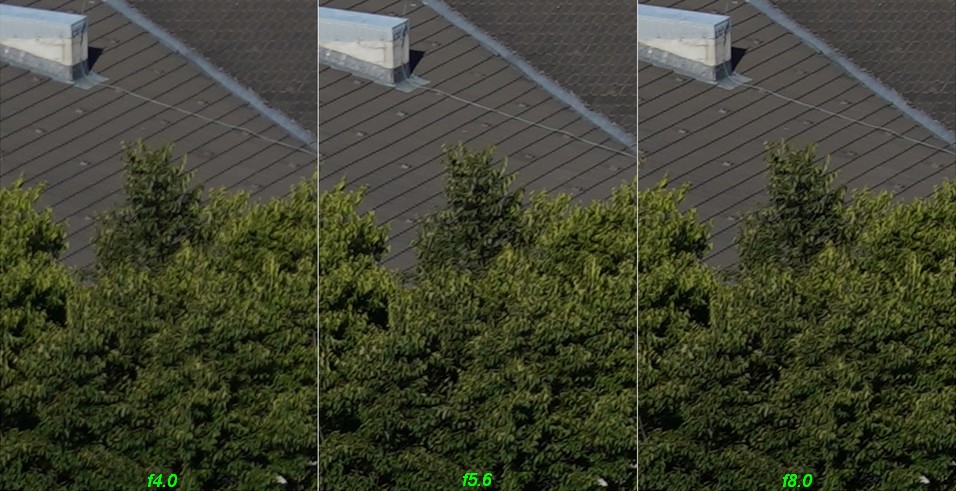 Now we look at 70 mm: here the center is quite good, less than before. Not bad borders, with better contrast and sharpness stopping down. 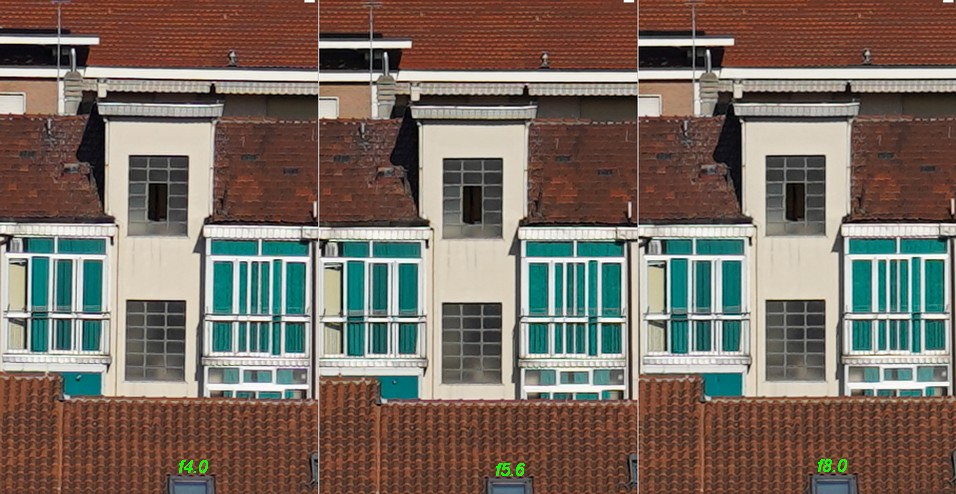 Let's finish at 105 mm: good center (not exceptional), good borders, soft corners at f/4 that request stopping down for a popping and crisp shot across the frame. 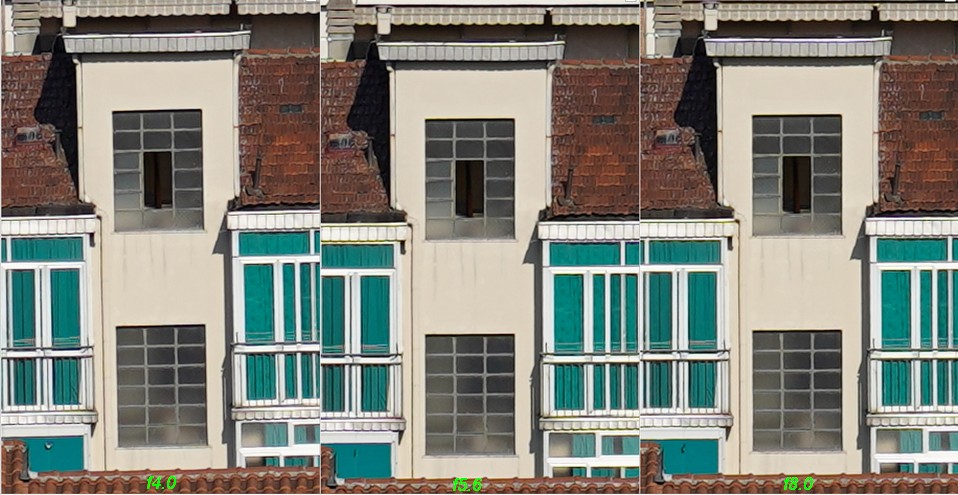 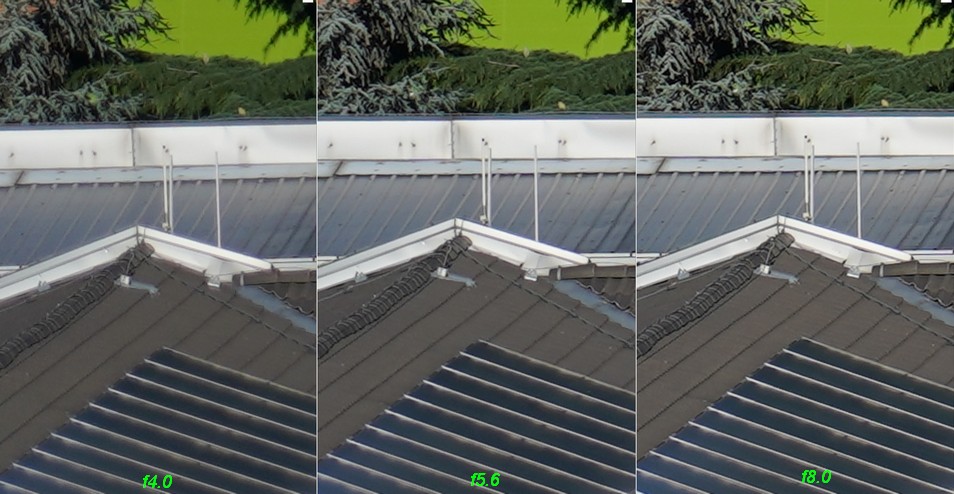 But how good is this lens?

Before moving on to the next aspects, it's interesting to compare this zoom to other lenses, besides comparing how quality changes with different focal lengths and apertures as we have done so far. 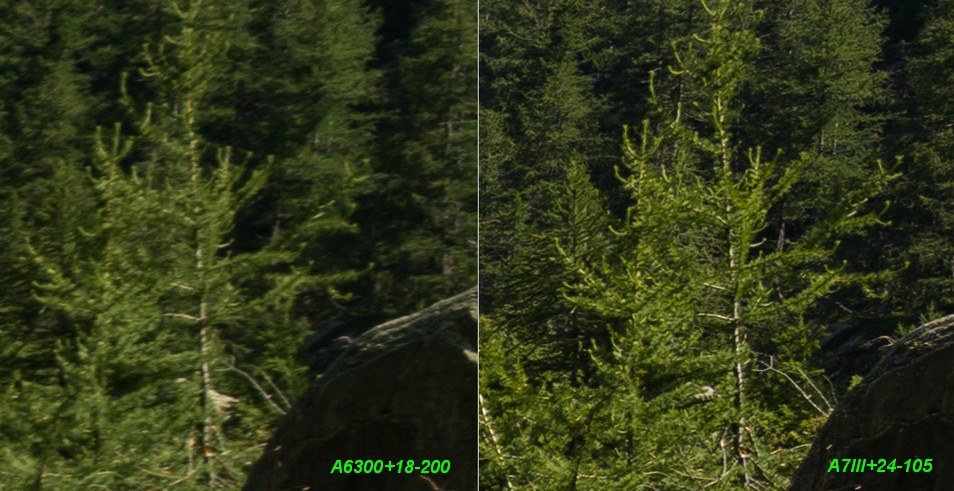 And now let's move to the other comparison, on the other side of quality: how does the Sony 24-105 f/4 stand up with a sharpness champion, the prime lens Sony Sonnar 55 mm f/1.8? Here again in the center there is no much of a difference but the prime lens shows visibly better contrast and sharpness with respect to the 24-105 outside the center. 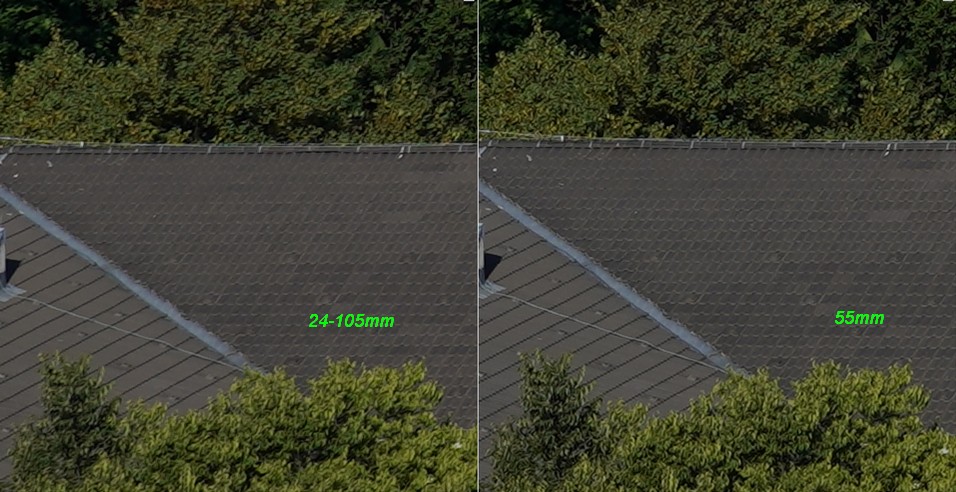 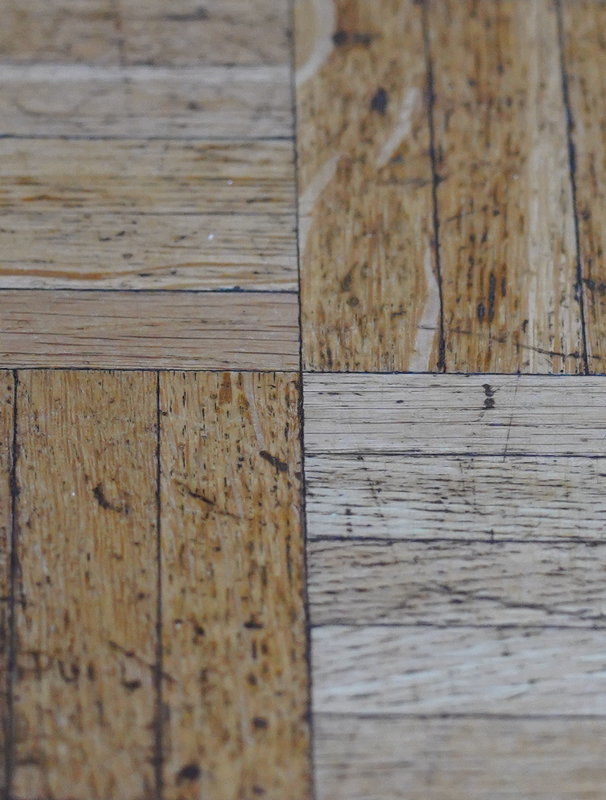 I have not done astigmatism/coma tests for astro-photography (deformation of light points in the peripheral areas of the frame) since with a maximum aperture of f/4 it's not an optimal lens for this type of usage.

It's not a fast lens so also separation of subject from background is somehow limited, but especially on long focal length and with close subjects you can achieve a pleasant blurred background. 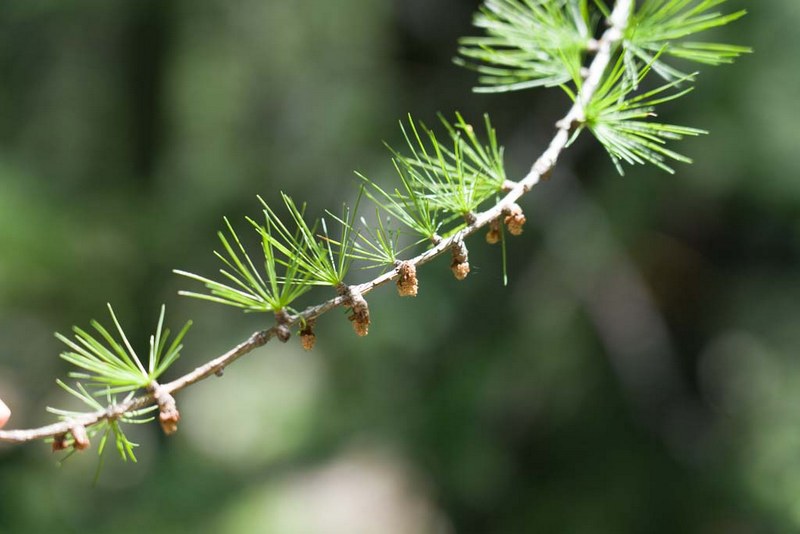 Having said that, bokeh is not top-notch: in transition zones (just behind the focal plane) the edges (like a tree branch, a railing) are rendered as a double edge and the internal of bokeh circles are not always perfectly smooth. 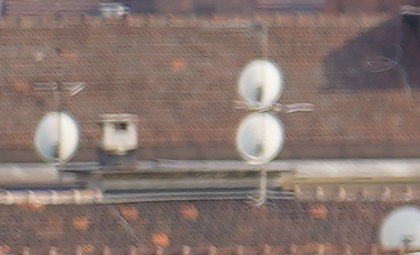 It's not the strong point of this zoom: at least on wide-angle position, where it's easier to have the sun inside the frame, many multi-color fringes may easily appear. 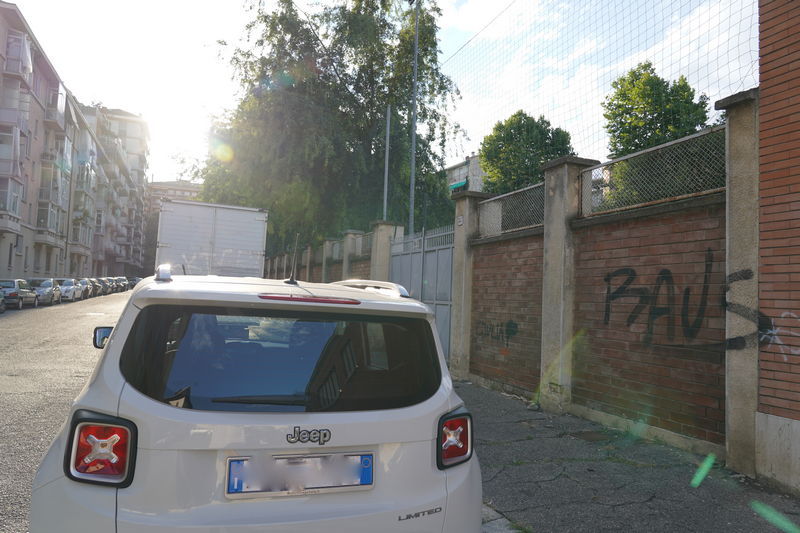 Which alternatives to this zoom? Sticking in the full-frame context, basically there are the following options:

As you can see, the Sony 24-105 f/4 G OSS is quite a good choice with no great contenders in this class, with a very handy zoom range.

A very good lens, with a range of focal length that makes it a one-lens option spanning from good wide-angle (24 mm is already quite wide for normal use) up to a medium telephoto (and you can also crop for even more since the resolution is good). Great quality in the center of the frame, good in the borders and very good stopping down to f/5.6, weak for flare / in backlight. Very solid build, optical stabilization and well controlled chromatic aberrations concur to a very positive verdict, though the price tag is high, in line with prices that Sony sets for its high-quality lenses.

See and buy this lens on Amazon (affiliate site) - thanks!

Referenced brands in this article: Sony